2018 was a strong year for commercial real estate, especially in multifamily. There are more renters than at any time in 50 years, PropTech became a venture capital darling, and city centers continued their renaissance, leading to new urban development and historic renovations.

Smart apartments also had an excellent year as Echoes, Nests, and smart locks took over apartment units and university dorms.

Yet, according to the Urban Land Institute, 2019 will be defined by a more ominous term: Uncertainty. No one knows how new technology will impact the industry, or if the affordable housing crisis will start to subside. Analysts expect the economy to slow, which probably means construction will slow as well.

Despite the uncertainty, smart apartments are still in position to thrive. That’s because smart apartment technology offers something for every multifamily developer: cost savings, flexibility, a competitive edge, and future-proof investments.

We expect 2019 to be a breakout year for smart apartments, both in technology and the overall living experience. Here are five trends to watch in the coming year:

In 2018, many apartments adopted smart home devices like locks and thermostats, but most still use conventional major appliances. We believe that will change in 2019.

The benefits of smart appliances (e.g., refrigerators, washers, and dryers) are the same as smart apartments themselves: they are more energy efficient, easier to maintain and create a better user experience. 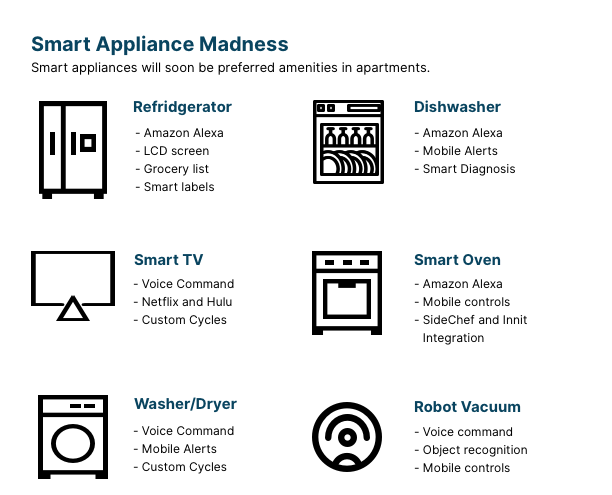 Companies like LG are continuing to improve their smart appliances to make them more affordable and beneficial. Residents can now check on their laundry, turn off the oven, and activate their robot vacuum all from their smartphone.

As far as most popular amenities go, in-unit washer and dryer are often top of the list. Smart appliances make daily chores even more convenient, and also lead to significant energy savings for properties. Look out for more apartments advertising smart appliances as amenities in 2019.

The Rise of Managed IoT Platforms for Multifamily

Multifamily developers are quickly realizing how difficult it is to outfit an entire building with smart home devices and appliances. The complexity of such a system goes far beyond installing a Nest thermostat.

For IoT devices to connect and communicate, apartment buildings need an ecosystem of software and hardware that integrates mechanical systems, electrical, networking, and online applications. Property developers have two options: Build a custom IoT platform, or use a managed IoT platform.

As more apartment communities embrace smart devices, look out for the rapid adoption of managed IoT platforms to support these devices.

“Apartment as a Service” Goes Mainstream

As the affordable housing crisis deepens and construction slows, startups and real estate behemoths alike are getting creative with new housing models.

There are two different variations of AaaS. The “apart-hotel” model, pioneered by WeLive and Locale, offers fully-furnished living spaces for extended stays. Roommate houses, like Bungalow and HomeRoom, curate groups of people to live together in repurposed single-family homes. Medici Living– with ambitions of becoming the WeWork of Co-Living– just raised $1 billion to expand their apartment share platform across Europe and beyond.

Driving the adoption of Apartments as a Service is technology. A traditionally-run apartment community could never swap out residents every few days (at least not at scale). With mobile, cloud, and IoT computing, anything is possible for this new breed of multifamily landlord.

Coworking as an Amenity

WeWork saw the shifting workforce landscape and capitalized impressively. Now apartment communities are trying to better serve the growing population of freelance and remote workers by providing coworking as an amenity.

Business rooms are nothing new in apartments, but they don’t meet the needs of today’s community-centric professional. Residents want to work in beautifully-designed spaces with natural light and a collaborative vibe. They want what WeWork has created, but not have to leave their building to get to it.

Some communities are responding by building large, open amenity floors with a variety of seating options. Others are adding actual coworking spaces that are open to non-residents as well. Expect to see the popularity of Coworking as an Amenity rise in the coming years, starting now in 2019.

Smart Buildings Will Find Their Killer Use Case

Smart buildings have been around for several years, but it has taken some time for people to see their true value. After all, why do building systems need to be connected to the internet when they’re already connected to each other?

The cost of IoT sensors has dropped dramatically, which means buildings can afford to put them everywhere: on building systems, in hallways, and in amenity spaces (and with managed IoT platforms, new sensors can be easily added and removed). Data from these sensors can be analyzed with machine learning to generate insights on how to improve the property.

But that’s only half the equation. Smart building systems and devices can use those insights to automate functions and tasks. For example, a building’s HVAC can generate its own work order when a filter needs replaced.

In a way, this trend is a consequence of other trends coming to fruition: smart appliances, smart devices, and managed IoT platforms. Together, hardware and software will allow more buildings to benefit from smart building data and automation.

Smart Apartments Grow Up in 2019

Smart apartments have gained popularity, but they have still been treated as a “nice to have” – a luxury amenity that looks good in marketing brochures.

We believe that will change in 2019. As the multifamily industry grapples with rising costs and changing resident demographics, smart apartments will evolve from an amenity to a necessity. Developers will see the value of smart apartments as a boost to the resident experience as well as to the bottom line.

The future of real estate may be uncertain, but one thing is clear: Smart apartments are here to stay, and the best is yet to come.

I’m Blake Miller, the Founder of Homebase and Host of The Future of Living Podcast.

I write about what we do at Homebase, entrepreneurship, the projects I’m working on, competitive BBQ and whatever else strikes me or I get feedback on.